Home » News » How to Write a Commencement Speech

How to Write a Commencement Speech

I can’t even keep track of all the online commencement speech festivals taking place this week for college grads and next month for high schoolers.

But I do know that dozens of Important People are working with dozens of Invisible People right now—professional speechwriters—to say something that might mean something to young people, who could use to hear something meaningful right about now.

The good news is, writing and delivering a commencement speech is very simple, just a three-step process.

Kurt Vonnegut did that pretty much every year for more than three decades. After reading the new third edition of his commencement speech collection, If This Isn’t Nice, What Is? I’m convinced you can, too. 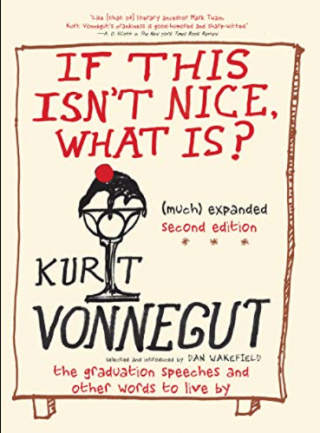 Let’s take these steps in order.

You have to say something funny, because one old person standing in front of hundreds or thousands of young people telling them how to live their lives is a funny situation. Saying something whimsical is only polite.

“Have we met before?” Vonnegut asked the class of 2001 at Rice University. “No. But I have thought a lot about people like you. You men here are Adam. You women are Eve. Who hasn’t thought a lot about Adam and Eve? This is Eden, and you’re about to be kicked out. You ate the knowledge apple. It’s in your tummies now. And who am I? I used to be Adam. Now I am Methuselah.”

In the same speech as in many of these speeches, Vonnegut declared what he believed is the homely purpose of human life: building stable communities.

“Some of you will become leaders, although that is now thought to be a somewhat grungy destiny. Nobody wants to be Papa anymore,” Vonnegut told graduates of Hobart and William Smith Colleges in 1974:

If you do have to lead, you may imagine that your mission is to help us find an amazing future. You should consider the possibility that you could serve the people better if you were to lead them intelligently and imaginatively back to some of the more humane and comforting institutions of the past. It seems certain that you will face plenty of social unrest in the future, and demands will continue to be made for economic justice. You will be very shrewd leaders indeed if you recognize that people are in fact crying out not so much for money as for relief from loneliness.

And most people will not be prominent leaders, he told the Rice grads in 2001:

Most graduates, any place you care to name, have been of use locally, rather than nationally, and have commonly been rewarded with modest amounts of money or fame—sometimes, more’s the pity, with utterly undeserved ingratitude. In time, this will prove to have been the destiny of most of you. You will find yourselves building or strengthening local communities. Please love that destiny, if it turns out to be yours—for communities are all that’s substantial about the world. The rest is hoop-la.

Step three: Tell them how to live. “Notice when you’re happy, and know when you’ve got enough,” Vonnegut told graduates of Butler University in 1996. Passing on advice he received from his own elders—this is another good thing to do in a commencement address, as it makes the affair less hubristic and more humble—Vonnegut credits his Uncle Alex for teaching him to enjoy himself:

Maybe drinking lemonade under a shade tree, or smelling the aroma of a bakery, or fishing, or listening to music coming from a concert hall while standing in the dark outside, or, dare I say, after a kiss. He told me that it was important at such times to say out loud, “If this isn’t nice, what is?”

As I read the Book of Genesis, God didn’t give Adam and Eve a whole planet.

He gave them a manageable piece of property, for the sake of discussion let’s say two hundred acres. I suggest to you Adams and Eves that you set as your goals the putting of some small part of the planet into something like safe and sane and decent order.

There’s a lot of cleaning up to do.

There’s a lot of rebuilding to do, both spiritual and physical.

And again, there’s going to be a lot of happiness. Don’t forget to notice!

Important People and Invisible People—and variably visible people in between!—it’s not too late to order this wonderful book, and remember that you don’t have to say anything new.

Better to say something old, and true. —DM

Insights from executive communicators and straight from the CEO

Cus D'Amato, on money

What do speechwriters have in common?